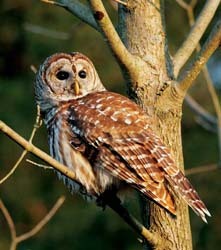 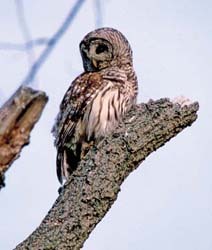 - Male and female plumage is identical throughout the year, but females can be about 30% heavier than males

- Barred Owls maintain their territory throughout the year and are believed to maintain a monogamous pair bond for life.

- Though the size of their territory varies greatly with the type and quality of habitat, a Barred Owl's home territory is approximately 700 acres.

- The prey (food) of Barred Owls is primarily small mammals, such as squirrels, chipmunks, voles and mice. Barred Owls will also prey in lesser amounts on small birds, amphibians, reptiles and fish.

- Predators of the Barred Owl include  Great Horned Owls, Northern Goshawks and climbing mammals such as raccoons and weasels.

- Barred Owls nest only once per year and lay an average of two to three eggs per nesting.

- Only the female incubates the eggs. Incubation lasts for 28-33 days and starts when either the first or second egg is laid.

- The first young to hatch are usually the largest in size with the second and third young being progressively smaller.

- the young will be covered with fine down and will begin to beg for food a few moments after hatching.

-The female will brood the young almost continually for about two weeks. During this period, the male will deliver all the food for her and the young to the nest.

- The young owls will leave the nest at approximately 4 to 5 weeks of age and remain in the branches of the next tree until they are able to fly at around 10 weeks of age.

- The young owls will stay together with their siblings throughout the summer and are fed by their parents. Then, the young will strike out on their own in early fall when the parents slowly wean them from feedings.

- According to bird banding records, the oldest known Barred Owl living in the wild was at least 24 years old. However, most Barred Owls would be lucky to reach even half this age.

Don't forget to stop by www.wbu.com and watch the live streaming video from the Barred Owl nest cam!!!!